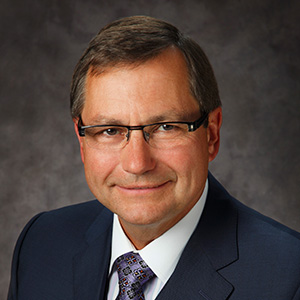 After 20 years as an MLA and then minister in the Alberta Legislature, The Honourable Ed Stelmach, ECA, succeeded Ralph Klein to become Alberta’s thirteenth premier in 2006.

The Stelmach Government invested considerably in post-secondary education and in municipalities and continued this investment through the global economic downturn in 2009. Under Mr. Stelmach’s premiership, the Alberta Government also sponsored the creation of a 10-Year Plan to End Homelessness, among other initiatives taken to uphold the priorities of integrity and transparency. He served as premier until 2011.

In recognition of his public service, Mr. Stelmach has been fortunate to receive various honours. In 2007, Ed Stelmach was made an honourary chief of the Blackfoot Confederacy and given the name of ‘Star Chief.' In 2009, the Government of Ukraine awarded him the Order of Prince Yaroslav the Wise, Class III in recognition of his work in the betterment of Alberta-Ukraine relations. He received the Hetman Award from the Alberta Provincial Council of the Ukrainian Canadian Congress in 2011 and the Michael Luchkovich Award by the Ukrainian Canadian Congress in 2013. Mr. Stelmach is also a recipient of the Queen's Golden Jubilee Medal and the Alberta Centennial Medal.

In recognition of his support of post-secondary education, Mr. Stelmach was awarded an Honorary Doctor of Laws degree from the University of Alberta, an Honorary Degree of Business Administration from NAIT, and a Bachelor of Applied Business from Lakeland College. Ed Stelmach was invested into the Alberta Order of Excellence in 2020.

Now, he is a SAIT Honorary Degree recipient. We are pleased to present Mr. Stelmach with an honorary Bachelor of Business Administration.