On the Job: Staying up to speed with an ever-evolving auto industry 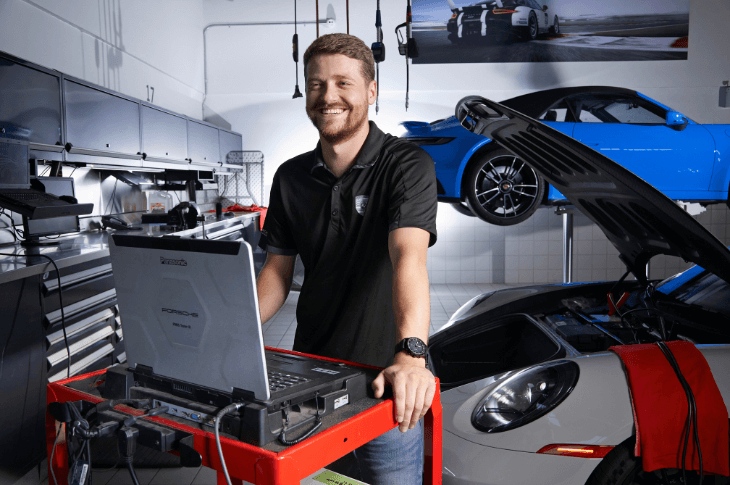 Matt Carr shares an insider’s look at working behind the scenes with high-tech cars, high-pressure repairs and hours on a hot tarmac.

“I’m kind of a dork like that,” he laughs as he shares his affinity for high-end European vehicles and Formula 1 race cars with LINK writer Ashley Naud (JA ’10).

Carr says, while he’s enjoyed taking things apart to see how they work — and how they can be improved — since he was a young kid, it was a high school auto mechanics course that led him to SAIT and set him on his career path. Today, Carr holds one of nine sought-after journeyman positions at Porsche’s Calgary dealership. The auto technician is also one-half of a two-person pit crew for the Calgary-based Formula race team, Hot Potato Racing (HPR), which was co-founded by SAIT instructor Wade Anderson (AST '91).

Eight years since his graduation, Carr hopes to gain his Gold Level technician certification this fall while also pursuing a business diploma at SAIT. The 27-year-old says his life-long love of learning continues to drive him to reach for new heights.

AN: How do you feel when you’re about to work on a fancy, high-end Porsche? Is it a rush?

MC: It's not so much a rush. Sometimes it's a little surreal, especially if you see the price tag on a vehicle or you've seen a car that you could play on Gran Turismo one day, and the next day, you're actually [test] driving it or replacing an engine on it … Some customers have saved up their whole lives to finally buy a Porsche because they're not attainable for the vast majority of the public.

AN: How has the introduction of hybrid and electric vehicles changed your profession and the skills required to do your job?

MC: There’s a lot of technology to keep up with, which also changes the way mechanics have to think and act. One of the tools I bought recently was a USB C to USB A adapter for software updates and programming recalls — I use it just as much these days. There’s a lot of standing in front of testers, staring at wiring diagrams and just letting computers be computers, even treating them like a cell phone sometimes and kind of doing a hard reset. I’m constantly training to keep my skills up to date.

AN: How did you become a pit crew technician for Calgary’s HPR team?

MC: Well, I actually just got lucky. Wade (Anderson) taught me when I was at SAIT. We always had good chats about Formula 1 — he nerds out on it just as much as I do — so he and I got along quite well at school. He was coming up for a race weekend when I was living in Edmonton and he needed some extra help. He said, ‘Hey Matt, you live in Edmonton. Do you want to come hang out?’ It was really that simple.

AN: What kind of pressure is your team under on race weekends?

MC: On some weekends, the cars race up to four sessions each day, which means between each of those sessions, we have six cars coming off the track to us. We don't know what state they're in, so it’s a very immediate triage to get the drivers out of their cars, diagnose and repair each car. They all need fuel and their tire pressures checked. For anything beyond that, we check in with the drivers first. We ask them, ‘How was it? What do you need? Did anything go wrong?’ — that sort of thing. Sometimes it looks like we have an hour-and-a-half between races, but by the time the cars show up and everything else has happened, we’ve got maybe 45 minutes to an hour to deal with them all … Then, we have to strap everybody in, make sure their car starts and they’re off to the pre-grid*.

AN: Has there ever been a time when it was decided a car was not fit to race?

MC: We have missed a couple of cut-offs. The driver can be sitting in the car strapped in, ready to go, but if we're still fixing it, it's not going to happen. As soon as you're rushing, you're likely to make mistakes. It probably sounds overly dramatic, but you always have to approach it as though somebody's life is in your hands because if there’s one bad day, it potentially is. And that's the same with road cars. I try to preach that to apprentices as well because little mistakes aren’t so little in automotive.

*The pre-grid is a staging area where each race car is placed into its qualifying position. Teams are given a one-minute warning to ensure pit crews have time to boost each car before the race begins. In amateur Formula races, each car drives onto the track in their qualifying order, completes one formation lap, and then begins racing when they cross the start line again.

Carr is part of the pit crew for the six-car Formula race team “Hot Potato Racing,” co-founded by SAIT instructor Wade Anderson (AST ’91)
This story is an extended version of the original print version in the Fall 2022 issue of LINK magazine.