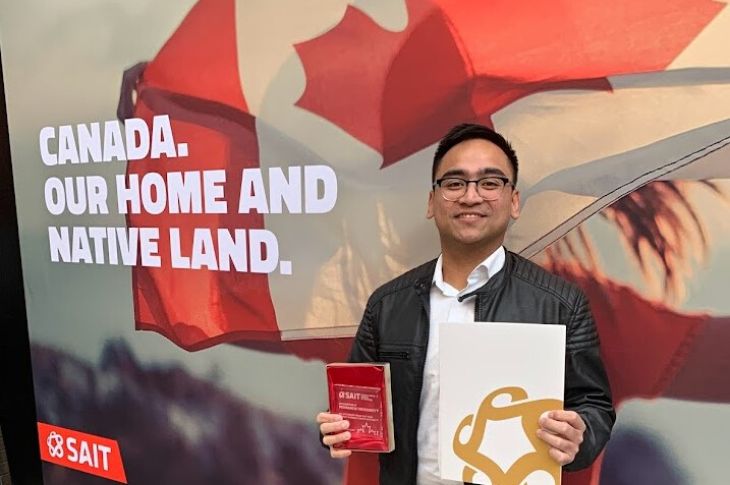 For Paul Jimenez (Petroleum Engineering Technology ’20), leaving his home in the Philippines to move halfway around the world to Calgary was not easy. Jimenez had completed a four-year Bachelor’s degree in Information technology at San Beda College Alabang in Muntinlupa. He was working for one of the country’s largest trucking companies when he decided to explore new opportunities.

“I saw the significance of oil in the trucking industry and got curious about petroleum engineering,” he says. “When I graduated from my IT program, I never thought I would study again because I just wanted to build my career, but then I realized I could do something more, so I started to research programs.”

Jimenez found that the program of his dreams was a long-term commitment offered at very few institutions in the Philippines, so he looked at international options.

“I chose SAIT because of the two-year diploma offered compared to the five-year bachelor’s degree in the Philippines,” he says. “In my mind, as soon as I graduated from the SAIT program, I could go anywhere in the world and improve my career!”

With mixed emotions, Jimenez made the difficult decision to enroll at SAIT and in 2018, he and his partner moved to Calgary.

“I was sad to leave my family and friends,” he remembers. “But on the other hand, I was so thrilled for the new journey that awaited me at SAIT.”

The pains of living thousands of miles from home hit Jimenez hard in his first year. Between his course work, lab schedule and part-time work at a grocery store, he found it hard to stay on top of everything.

“There were months when my partner went back to the Philippines,” he says. “It was really depressing for me to live alone. I felt drained physically, emotionally and mentally.”

When his situation seemed like it was becoming unmanageable, Jimenez received financial support through two student awards — the second of which came at a crucial time in his last semester when he was not working. 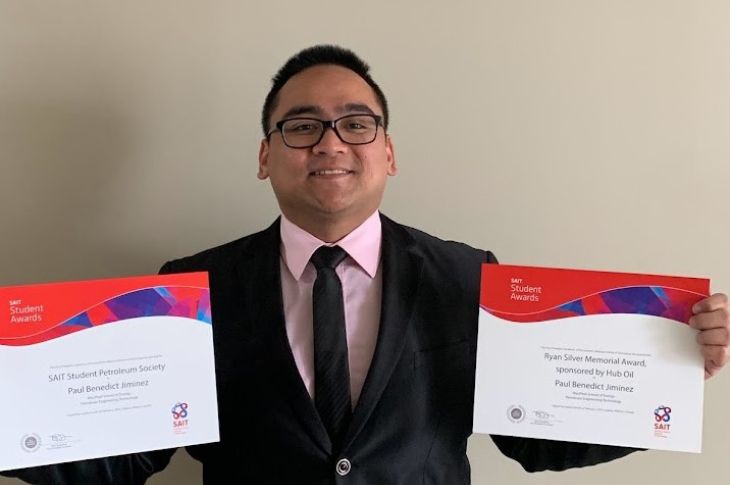 “The awards made a huge difference financially,” he says. “I rarely received awards like this back home, but these made me feel recognized and that my hard work was being appreciated … I was so grateful! The recognition helped me gain my confidence back and kept me motivated in my studies.”

Like so many students around the world, Jimenez’s educational experience was also disrupted by COVID-19.

“I would say the most unfortunate impact was the cancellation of Convocation as I had dreamed of marching across the stage in Canada to attain my diploma.”

To make matters worse, Jimenez graduated at a time of uncertainty in the oil and gas industry. After completing his studies, he spent the next two years applying to positions related to his diploma while working several jobs to stay afloat. With remarkable determination and resilience, Jimenez eventually landed his dream job as Data Technician/Drilling Optimization at Phoenix Technology Services in Sept. 2022.

“It was an unbelievable feeling as I finally got my dream job that aligned with what I studied at SAIT,” says Jimenez.

A sense of recognition

Then, on Oct. 26, SAIT’s International Centre hosted the first-ever Permanent Residency Ceremony, a celebration of the journey made by many alumni who became permeant residents in the past five years. Jimenez had also recently gained his Permanent Residence, another long-term goal and attended the event.

“I felt acknowledged and recognized. The Class of 2020 never had a chance to cross the stage, and this Ceremony made up for it and then some! I am so grateful that SAIT made this event possible.”

The beginnings of an exciting future

When he reflects on his experiences since he decided to come to Canada, Jimenez is full of hope and positivity.

“I felt that those obstacles unlocked my hidden potential. All those experiences made me stronger, he says. “My time at SAIT and the awards I received made me feel valued. They served as an inspiration for me to excel … These accomplishments are not the end of the road, they are the beginning of an exciting future.”

SAIT has welcomed thousands of international students from more than 140 different countries and is proud to assist those who choose to make Calgary their home. Visit SAIT.ca/donors to find out how you can change the life of a student like Paul.