Learn more about our vision, mission, spaces and equipment, collection and history.

Need assistance? Reach out to us online.

As a collaborative leader on campus, we will play an integral role in developing critically engaged information creators and consumers among SAIT students, faculty, and staff.

The Reg Erhardt Library facilitates excellence in teaching, research, and learning through the provision of authoritative information resources and community-driven programs. By providing equitable access to print and digital collections, innovative technology, and learner-focused spaces, the Library creates an inclusive environment that supports creative inquiry at SAIT.

Within the Reg Erhardt Library are a variety of study spaces and equipment to support student success.

The Collection has been established at the Reg Erhardt Library to provide users with equitable access to subject-specific materials relevant to SAIT programs and schools.  The Collection evolves in close alignment with SAIT’s strategic priorities and values, serving as a living, highly adaptable entity, usage being a key principle.

History of the Library 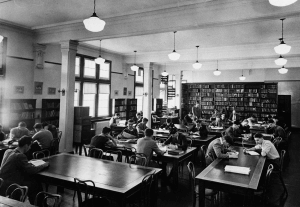 The history of the Reg Erhardt Library, like that of the institute it has served for close to a century, can be traced back to the origins of SAIT and the start of the twentieth century. Opened October 16th, 1916, the Provincial Institute of Technology and Art (as SAIT was known at the time) was initially housed in the rooms of the Colonel Walker School, which had been extensively renovated to provide the institute with both suitable classrooms for instruction, as well as a small library on the upper level.

However, the occupation of the Colonel Walker School was always intended to be temporary. In 1922, when the institute moved to the current location at the North Hill campus, the library was relocated to the recently completed Heritage Hall (then known simply as the Main Building) taking up residence alongside the locker rooms and gymnasium on the third floor. Barring a five-year absence in the 1940s, during which the institute was temporarily relocated to the Exhibition Grandstand grounds as a part of the war effort, this new location would continue to house the library for the next three decades. As the institute's programs continued to expand, so too did the library's collection of supporting technical materials. 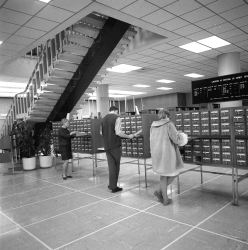 With the opening of the John Ware Building in 1958, the library would again find itself in a new location, moving to the second floor of the newly constructed building. This move provided more than a new home on campus as, for the first time in its history, the library was provided with sufficient space to introduce open stacks. This allowed students direct access to the majority of library resources without the need for staff assistance. Well situated to serve the needs of the campus, the library would continue to occupy this space for nearly a decade before once again moving into one of the new campus additions in 1967. 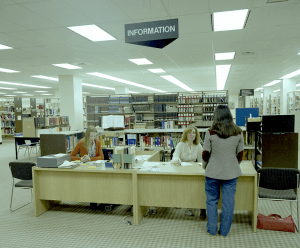 Along with nearly doubling of the usable space on campus, the opening of the Senator Burns Building in 1967 also marked the opening of the largest technical school library, at that time, in Canada. Located on the second floor of the main tower, this newly built library provided students with much-needed study space - plus an extensive collection of fiction, newspapers, periodicals and reference books for use in their studies. Over the next thirty years, further significant changes to both the library collection and the services it offered would be seen. Films, slides, cassettes, microforms and computer software would be incorporated into the main collection, as would services such as online catalogues, full-text databases, student workstations and access to the Internet. It was also during this time that the library would temporarily merge with campus media services to form the Learning Resource Center in 1972, before once again separating nearly 20 years later in 1988.

In 2001, as a part of the major campus revitalization project of the time, the library made its most recent move. Taking a prime location in the Stan Grad Centre (formerly the Heart Building). Spanning across two floors in the MC wing of the centre, the library was subsequently named in honour of former instructor and SAIT president Reg Erhardt by his former student and SAIT alumnus Stan Grad in 2012. Today the library continues to provide members of SAIT with the tools and resources necessary to support their programs.