SAIT’s primary goal is to equip students with essential skills for career success in industry with an applied education and work-integrated learning. And each year, we conduct a SAIT-wide survey to determine the employment rate, salaries and satisfaction of our newest SAIT alumni. The survey is conducted annually with the most recent class of SAIT grads.

We conduct this survey to ensure our programs are relevant to industry and our grads are finding success. We also want to help prospective students make informed decisions about their career paths.

School of Health and Public Safety

School of Hospitality and Tourism

School of Manufacturing and Automation 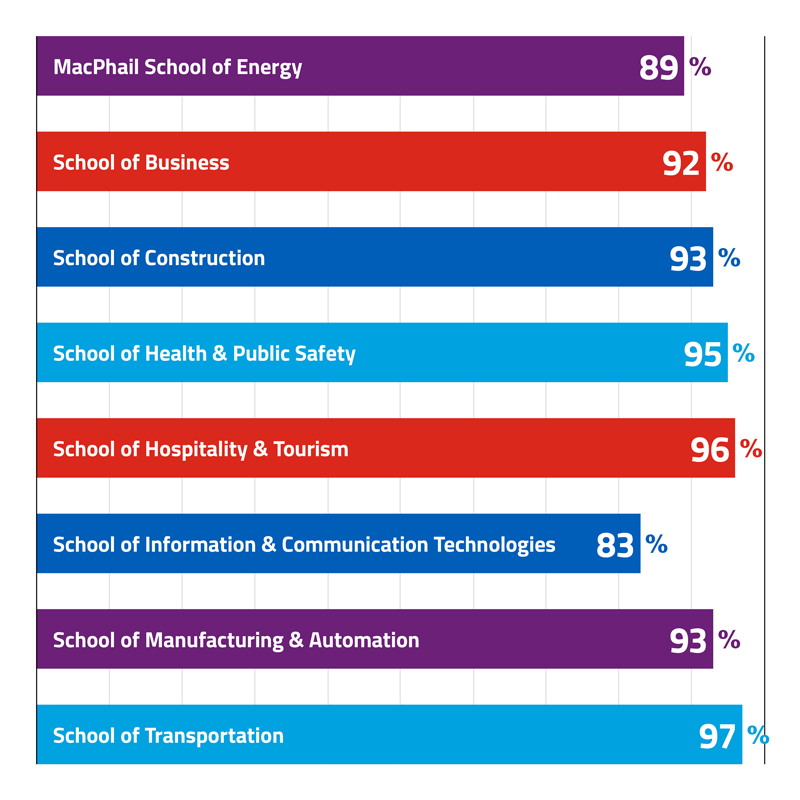 Curious about how satisfied grads are with their school and SAIT?

To determine the extent to which graduates from SAIT programs find employment, the type of employment and the level of starting salaries.

A list of 2020/21 graduates from SAIT programs was generated from Banner. The graduate's name, information on program finished, contact telephone number and email address was provided. Overall, the database included records on 5,425 graduates.

To compile the 2021 employment statistics, SAIT retained the services of Leger, an independent market research company. Academic Chairs notified graduates to expect the survey one week prior to the survey launch. The survey was conducted online and by phone. Results were collected online for the first two weeks of the study. Following this period, non-respondents were contacted via telephone to maximize the response rate. The two modes were conducted simultaneously for the remainder of the study, with 40% being collected by phone and the remaining 60% collected online.

± The margin of error overall is equal to ±1.18 percentage points at the 95% confidence level, finite population correction factor applied. A total of 69,946 contacts were made via phone call (38,403) or email (31,543) to graduated students. The maximum number of initial call attempts was 52. Additionally, nine email reminders were sent during the course of the study.

The data were input into a database and analyzed. Survey results of those who responded to the survey were subsequently extrapolated to the entire population of graduates/completers. Caution should be used when examining results by programs with fewer than 30 graduates. With smaller base sizes, the percentages may offer a distorted picture when one respondent represents more than 3% of the total respondent base.

In labour force - graduates who are employed or unemployed but looking for work.

Employed - graduates employed at the time of the survey, or had been employed prior to the survey for three or more months.

Full-time employment - 30 or more hours of work per week

Permanent employment - the number of graduates employed in permanent jobs

Annualized salary - graduates were given a choice to provide salary information in a form of annual or monthly income, daily or weekly earnings or hourly wages. If the student provided this info in a unit other than the annual salary, the following calculations were used to derive respondents' annualized salaries in full-time jobs:

Note: Training-related salaries are not reported for programs with five or fewer responses