The road ahead: A conversation about equity, diversity and inclusion

As global Black Lives Matter protests sparked a cultural awakening last summer, the conversations involved in building an Equity, Diversity and Inclusion (EDI) strategy at SAIT — a process that began in November 2019 — became even more relevant.

To mark the launch of that EDI strategy earlier this year, LINK reached out to two trailblazing alumnae, Adora Nwofor ( Petroleum Land Administration ’07) and Shahzia Noorally ( Business Administration ’05) to ask what EDI means in their own lives and careers.

Their insights are as provocative as their achievements: comedian Nwofor balances activism (as president of Black Lives Matter YYC and a founding organizer of the March for Women YYC) with creating season two of her web series, Living a Creative Life; and Noorally advocates for marginalized people in the corporate world as a senior human resources professional while dispensing career strategy and advice for women of colour in her podcast, The Colour Gap.

What does EDI mean to you?

Shahzia Noorally: For me, EDI means creating safe spaces for belonging in environments that are controlled by policies. In corporations, it’s difficult to focus on the humanity of a company when you’re also working against a culture that’s been around for a while. It’s a constant battle of balancing advocacy with assimilation.

It sounds like it’ll be a while before everyone is on the same page.

SN: Yes. We need to meet people where they’re at, and that becomes quite taxing because it often falls on the shoulders of minorities to teach people. You would hope that, with all that happened in the world last year, people would have a more active desire to become true allies, but racialized people are often put in the position of teaching people why the things they say or do are insensitive.

AN: Racism is a workplace hazard, and investing in people’s skills, development and anti-racism training is cheaper long-term because then you won’t have to deal with high employee turnover, or with having employees feel like they don’t belong. And you’re going to be more productive in your workplace if you’re not dealing with racism — but it’ll be a while before we get to that point.

What barriers have you encountered at work? How did you overcome them?

SN: I’m a first-generation Canadian, and I’m also a Pakistani Muslim woman. As a racialized kid, I normalized getting teased for not looking like everyone else. But I really noticed how different I am when I got into a leadership position and realized that, in my 10 years in human resources, I’d hardly ever seen a woman in my department who looked like me. It was almost exclusively white women. That was when I decided to use my voice by starting a podcast to help other women of colour navigate the corporate world.

AN: I’m also first-generation — I’m African and Caribbean — and as a large Black woman who doesn’t sound Black, job interviews over the phone go great. But the second I show up at a business, people worry that I’m going to make them change their ways. After SAIT, I did everything right when job-hunting and what I got was a receptionist position — but eventually, I was laid off for “complaining too much.” And that’s what racism is: you can do everything right and they’ll still get rid of you because you make them uncomfortable. But in comedy, I don’t answer to anyone, which is empowering.

What should be done to support others who encounter similar barriers?

AN: Mentorship and money are huge, but we also need to allow marginalized people to make mistakes so they can learn and grow. And we need to give marginalized people love and care because they are often starved of that in our society. These things are just as important as EDI.

SN: Removing ego needs to be part of the equation, especially so that those who are privileged can become true allies and know what to do with their privilege. It can’t just be that you put in a policy around wanting to hire more diverse people — you have to understand how privilege helped you get where you are and then use your privilege to help others.

You’ve created safe spaces with your creative endeavours. What have you learned from these outlets?

AN: Understanding that there is so much value in making a mistake and learning from it. I’ve learned that from doing comedy, and it really is the only way you can grow. Being easy on yourself is crucial.

SN: Learning to give myself grace has been huge. So has recognizing that my voice will get stronger and that, in time, my podcast will become what I want it to be. Giving yourself the grace to put something into the world — even if doing that scares you — has been a big lesson for me.

How can all members of the SAIT community foster equity, diversity and inclusion?

SN: There’s so much value in listening to others’ stories. Curate your social media feed to understand stories that are different than your own, and read books written by people who come from different backgrounds — these are extremely useful tools to understand how others walk through the world.

AN: Integrity and connecting with your community are important — we are nothing without community, and we are nothing if we don’t put humanity first. Hold yourself accountable for your actions, allow yourself the opportunity to grow, and learn about others in a respectful way. 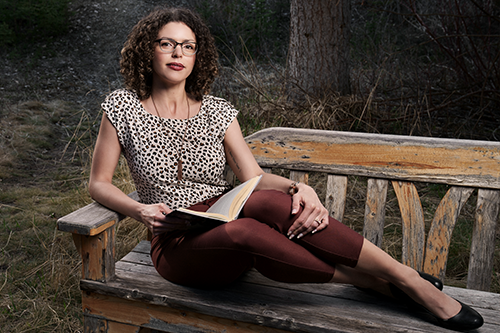 LINK writer and SAIT alumna Giselle Wedemire (JA '13) drew on her personal exploration of EDI to create a reading a listening list for those who want to learn more. Start adding Giselle's top picks to your lists.