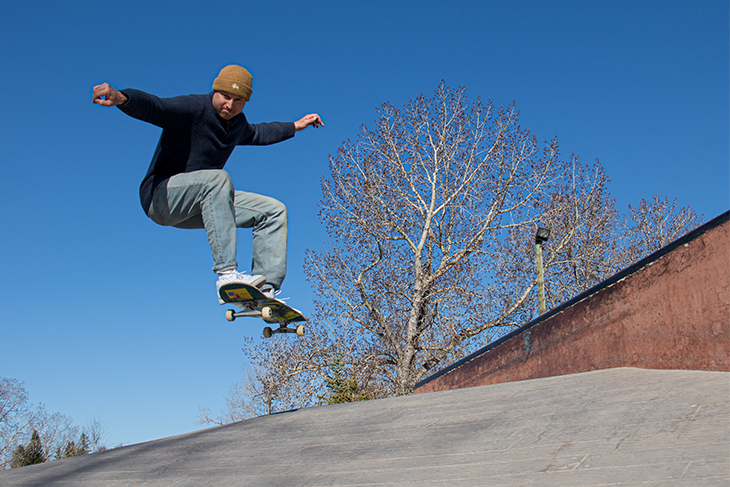 Matt Janz (JA '12) is a low vision, legally blind Calgary skateboarder and the founder of Skate Bats, a program that introduces kids with vision loss to this highly creative skill that Janz says lets them "learn to take a risk, push themselves and learn something new and difficult."

Matt Janz was six years old the first time he stepped onto his dad’s old skateboard. Figuring out how to navigate the bump at the end of his driveway introduced Janz to a new world of mobility — and started him down a road that would eventually lead to creating a skateboarding program for kids who have vision loss.

Since its first meet-up in a church gym just over a year ago, Skate Bats has expanded in ways Janz never imagined. Not only are programs in four Alberta communities bringing a whole new group of kids to an activity that’s cool, creative and a bit dangerous, but those same programs are also helping him find hope, purpose and a new identity. Since 2015, Janz has continued to skateboard aggressively while losing his vision to a hereditary condition called retinitis pigmentosa.

Setbacks and fun can happen at the same time

“One of my first jobs is to help kids be okay with falling. I teach them to bail and let the board go wherever it may. Before you know it, they’re going down huge ramps and steep drops into six-foot quarter pipes. Every trick becomes a project that they build step by step, bail by bail."

“It’s a powerful mindset and it’s how I approach every new project or event I take on. Sometimes things aren’t going to work out but I know that, eventually, I’ll be able to create something new and beautiful.”

Communicating your needs can be empowering — and exhausting

“Skate Bats kids aren’t just trying skateboarding; they’re designing new and creative ways to meet their vision-loss needs — adaptive skateboards, ways to mark where a skateboard ramp transitions from a flat surface to a vertical one, and LED lighting. It seems like the more we communicate our needs, the more receptive the skateboarding community is to helping us meet them."

“But there’s a flip side to self-advocacy. When people see me with a cane and a skateboard, it’s confusing. When I’m in a pub in non-pandemic times and can’t find the washroom, people think I’ve had too much to drink. Constantly explaining and defending yourself is emotionally exhausting and can outweigh those empowering moments.”

Inclusivity opens doors for everyone

“In skateboarding, the more creative or gnarly you are, the more applause you get. Because those things have real value, there’s room for everyone.

“One Skate Bats participant is branching out to discover videography. Another is using skateboarding as a vehicle for positive social change. When people are included and empowered, the reimagined spaces we create offer new possibilities for everyone.”

“Losing vision is tough. My future — potential medical breakthroughs aside — is total blindness, but Skate Bats has given my vision loss purpose. It’s helping me work through my own perceived limitations. I’m building an identity and confidence to skate beyond my vision loss and see myself as a blind skateboarder, a blind rock climber or a blind mountain biker. That is super hopeful and very empowering.”

This story was originally written for the print version of the Spring 2021 issue of LINK —  Raw, risky and full of joy.