A place to belong for those with young-onset dementia

Since the COVID-19 pandemic was declared in March 2020, stay-at-home orders worldwide have given millions of people first-hand experience in social isolation — something people with young-onset dementia often face on a daily basis. Although YouQuest is staying in touch with its community online, its in-person services were suspended due to the pandemic. This story, written and photographed on the eve of public health orders limiting group gatherings, is a pre-COVID snapshot — and a reflection of the importance of human connection.

“You have frontotemporal dementia.”

Stephen Clarke (EDT ’95) was just 50 years old when he received this life-altering diagnosis six years ago.

“There were things on the computer that started to get really confusing for me… I started to miss dead­lines, which I never did — I had a reputation for never missing a deadline.

“Then it was driving. About a year later, I think, I was driving home on either South 14th Street or Elbow Drive — I can’t remember which. And I couldn’t remember how to get to my place in Willow Park. I re­member thinking, ‘What the hell is happening to me?’”

Initially, Clarke was misdiag­nosed with anxiety. He went on long-term disability and started working with a psychiatrist to manage his symptoms. Finally, he was sent for a PET scan, which checks brain function.

“It was a bittersweet moment when I finally got the diagnosis after so long looking for an an­swer,” Clarke says. “‘All right, an answer — boom, here it is. Now I can get it fixed, right?’ But the answer is, there is no fix. And it’s just going to get worse, right? There goes everything I’ve worked for. There goes the career I was really good at.”

Dementia is the overall term for a combination of symptoms that include a decline in the ability to remember, think, reason and relate to others. The symptoms can worsen over time until the person can no longer take care of themselves and live independently. 1

Clarke is one of about 16,000 Canadians under the age of 65 living with young-onset dementia, according to the Alzheimer Society of Canada.

His long search for answers isn’t rare — young-onset dementia is often difficult to diagnose. Even after diag­nosis, resources and practical support specifically geared to people under the age of 65 are hard to come by.

That’s something Cindy McCaffery discovered when her husband, John, was diagnosed at the age of 48. It was the impetus for McCaffery and her friend, Myrla Bulman, to establish YouQuest, a Calgary charity that provides recreation therapy and community for those living with young-onset dementia and for their families.

Bulman oversees the logistics of YouQuest’s weekly service, where recreation therapists, volunteers and participants meet in SAIT’s Campus Centre. I visit the group one Thursday morning in January. It’s a frigid -28 degrees Celsius, but the weather serves as no deterrent for partici­pants. As volunteers help them find their way to the Odyssey Café, everyone is eager to connect with one another after the Christmas break.

Because young-onset de­mentia symptoms differ widely from person to person, You­Quest recreation therapists, volunteers and participants co-plan each week to incorporate individual interests and needs. You­Quest also works with SAIT Recreation and other groups to create a safe and welcoming atmosphere where the group can enjoy a full day of active indepen­dence and social connections — a basic human need. 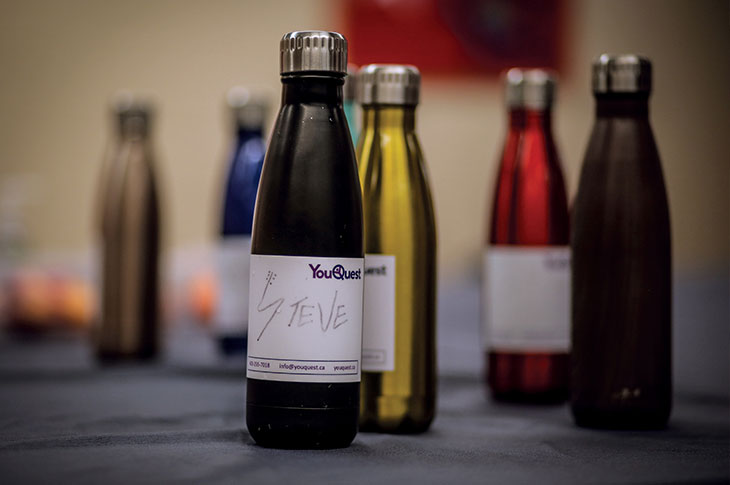 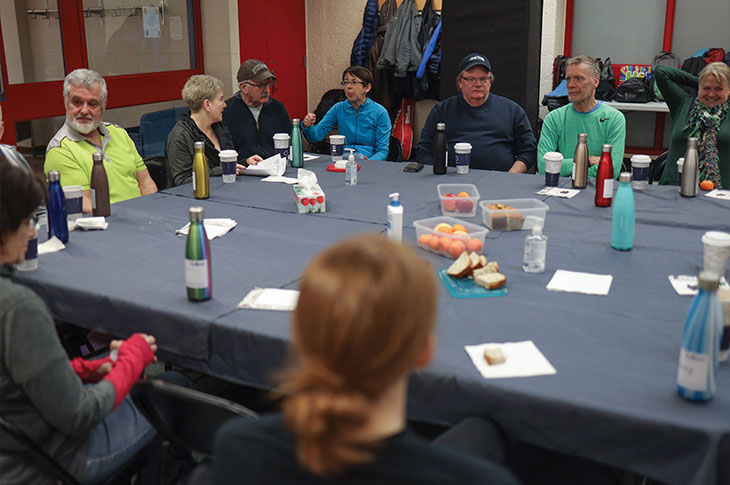 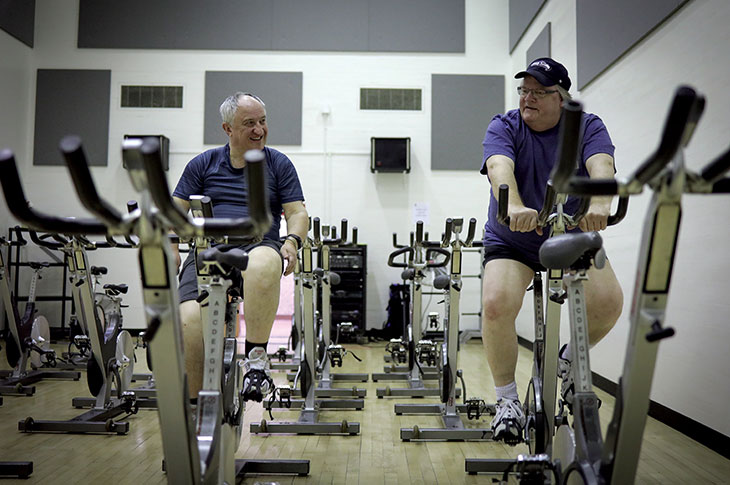 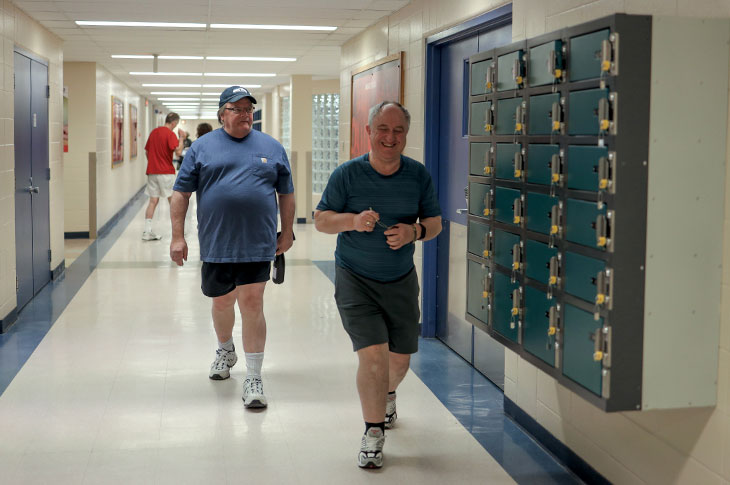 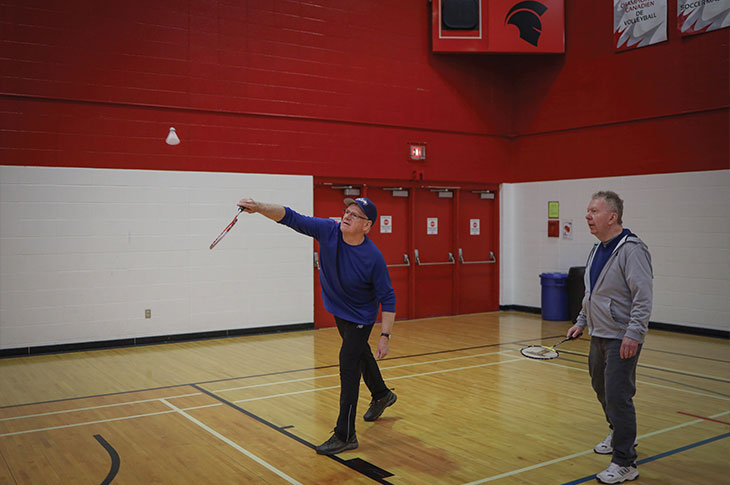 “The most important thing we do is offer choice,” says Bulman. One example is lunch when the group heads to the 4 Nines Dining Centre. They join the short order lunch line and choose from four options — all visible on the counter.

“An entire lunch menu may be overwhelming for someone with young-onset dementia, but four options make it easier for them to make a selection for them­selves,” Bulman says.

“We’re creating a culture where participants tell us what they need. There is a certain amount of routine but there is freedom within that routine.”

Among the group of 12 participants, I meet an an­esthesiologist, an immigration lawyer, a competitive lifeguard and a librarian. Some share updates from their holiday breaks, while some have more difficulty finding words. Still, each shows respect and offers encouragement to one another.

Then, as participants finish up their fitness activities — this morning, the choices include rowing, squash and cycling — they gather together in front of the SAIT Recreation window.

“We try not to rush these moments,” Bulman explains. “The simplicity of it is stun­ning. It may seem like they’re just standing around after their workout, but they are enjoying having a conversation — even if they don’t remember one another’s names. This kind of ordinary interaction can make Thursdays one of the best days of their week.”

Retired telecommunications professional Dave Grose (TXT ’81) has seen the benefits of the service first-hand since he began volun­teering with YouQuest when it was launched as a pilot project in September 2018.

“We used to wear name tags but now we don’t. People wonder, ‘Well, who is the participant and who is the volunteer?’ But does it matter?” Grose says. “Many of the participants know they have dementia and it’s frustrating for them, so why bring it up?

“I guess a big key is knowing we are all the same — we all just want to belong.”

And for participants like John Wood — a graduate of SAIT’s Industrial Instrumen­tation Technology program — YouQuest also means a chance to keep playing a favourite sport.

“John loves to play a hard game of squash — his wife says he’s always asking if it’s a SAIT day,” Bulman says. “Although his memory loss is extensive, playing squash draws on John’s muscle memory and gives him both independence and enjoyment.”

Many diseases can cause dementia, including Alzheimer's disease. Frontotemporal dementia is an umbrella term for a group of disorders that impact the parts of the brain usually associated with personality and behaviour. 2

A 2009 article published in Geriatrics & Aging by Ann Kolanowski, Donna M. Fick and Linda Buettner outlines how recreation therapy is also more effec­tive than medication in helping to reduce behavioural symptoms caused by the isolation and boredom that often accompany dementia. Recreational programs help “promote quality of life by providing an appro­priate level of stimulation using meaningful activities,” the article continues, and help ease symptoms such as agitation, aggression and apathy that can be difficult for an individual’s caregiver — often a family member or friend — to navigate.

“While we offer a lot of support that is good for the participant, it’s also incredibly valuable to the care­giver — that can’t be understated,” says YouQuest board member Roc Spence (DET ’74).

Spence, who joined the board in 2019, says YouQuest hopes to expand to a multi-day service, as requested by participants and families.

The group is also working to secure funding to further devel­op a web application prototype that will allow participants to track and, working with their therapists, reflect back on their individual progress and prefer­ences. It’s a project that began as a SAIT student capstone and is now overseen by SAIT’s Applied Research and Innovation Services (ARIS) department.

Clarke, who continues to live independently with the daily help of his two childhood best friends and their families, says the experiences and relationships he’s gained through YouQuest are invaluable. He’s looking forward to the day when its services are offered twice a week.

“I have an exercise bike at home, but at YouQuest, I’m in a gym with other people,” he says.

“Just now, I was playing pool with a bunch of peers who have whatever dementia they’re dealing with, right? But what were we doing? We’re shooting a game of pool and everybody’s familiar with pool. Are we all really great at it anymore? No, but that doesn’t matter.

“YouQuest lets me use my brain again like I used to use it before. One day per week, I get that back. My opinion matters to YouQuest. I could say it frees me, I guess, from the confines of an otherwise demen­tia existence.”