On the job: The life of a railroader

When Leslie Lukan (Railway Conductor ’06) enrolled in SAIT's Railway Conductor program on a whim in 2005, she knew nothing of what the future would hold — only that she wanted to double the income she had been earning as a physiotherapist's assistant.

After 10 years working as a locomotive engineer, she says she couldn’t go back to an ordinary desk job — the life of a railroader means every day is different. Lukan’s work assembling and driving freight trains is vital to Canada’s economy, moving goods 365 days a year, 24/7.

With a demanding on-call schedule and long trips away from home, life can be unpredictable, but Lukan finds balance by prioritizing self-care and time with her loved ones. Plus, she says, the pressures of everyday life disappear once her train begins its journey, travelling at 60 miles an hour, hauling cargo that ranges from automobiles to grains.

Lukan sat down with LINK writer Giselle Wedemire to discuss what it's like being behind the controls of a 14,000-tonne freight train. 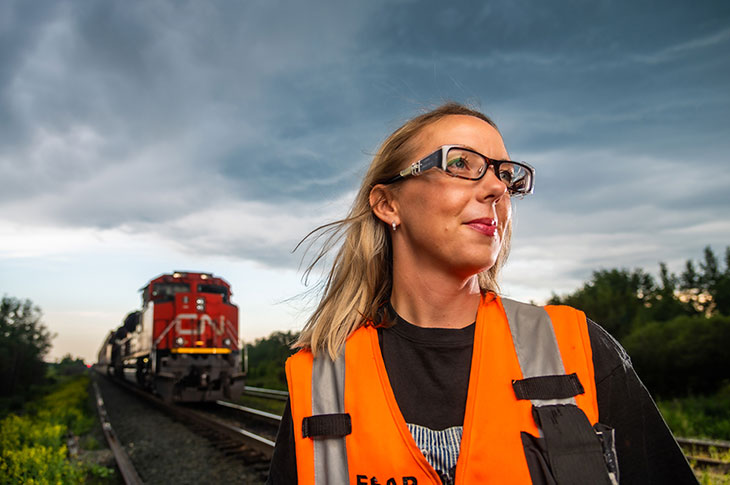 What is it like being in the engine of a freight train?

LL: If you're on a good train, it's quiet, but on an older engine, it can be loud, so I have to wear noise-cancelling headphones. Just like how there's a new car smell, we say there's a new engine smell; newer ones smell nice, but older ones smell like an outhouse.

How does it feel knowing that you're in charge of everything on your train?

LL: Sometimes you forget how important the cargo is, but it's humbling when you remember that you're in charge of so much revenue. We have two engines that are each valued at $3 million, plus the values of each train car. It's mind-boggling and humbling that I'm in charge of getting everything from Point A to Point B.

How many people are typically in a crew, and how do their roles work together?

LL: There's only two people in a crew — the conductor and the locomotive engineer. The conductor is the junior person on the crew.  Their job is to do all the work on the ground, which kind of means they are my eyes ― they tell me what they see, so I can control the engines safely as I build the train or drop off cars at a customer’s site.  As an engineer, I am the senior crew member, and I stay inside the engine, where it is warm and dry, all year round.  Once we are on the road, my job is to keep the train moving in a safe manner, follow speed limits and stop when we need to.  The conductor’s job on the road is to call signals, talk to the foreman and the rail traffic controller, all while making sure the engineer is aware of everything that is happening or going to happen.  It’s a huge team effort building and getting a train to its destination safely and efficiently.

What's a typical day at work like for you?

LL: I never know what time I'm going to work, and we work on-call, in a pool. Once I get to number one in line [in my pool], I will be called to work on the next train that's being sent out of Edmonton. We build our train, and then my conductor and I will head out on the road. Typically, I work 10 to 12 hours a day on my usual route. Once we get to our destination, we stop for anywhere between six and 14 hours so I can get some rest. When I'm back to number one in the pool, I get another call, repeat the cycle and drive back to Edmonton. When we arrive, we put the train away so its cars can be broken down and separated, depending on where they need to go, and then I can head home. Once I'm home, I can take anywhere between eight and 24 hours off, and then I do it all over again.

What’s the best part of your job?

LL: One of my favourite parts of my job is blowing my whistle and waving at kids who’ve lined up to see my train pass by. It really makes their day, and I always make sure to wave, especially if it's a little girl looking up at me, because I want to inspire girls to get involved in the railways. It's a huge honour to be out there, potentially inspiring girls to get this job, or any kind of job that's not typically associated with being a woman.

This interview has been edited for length. 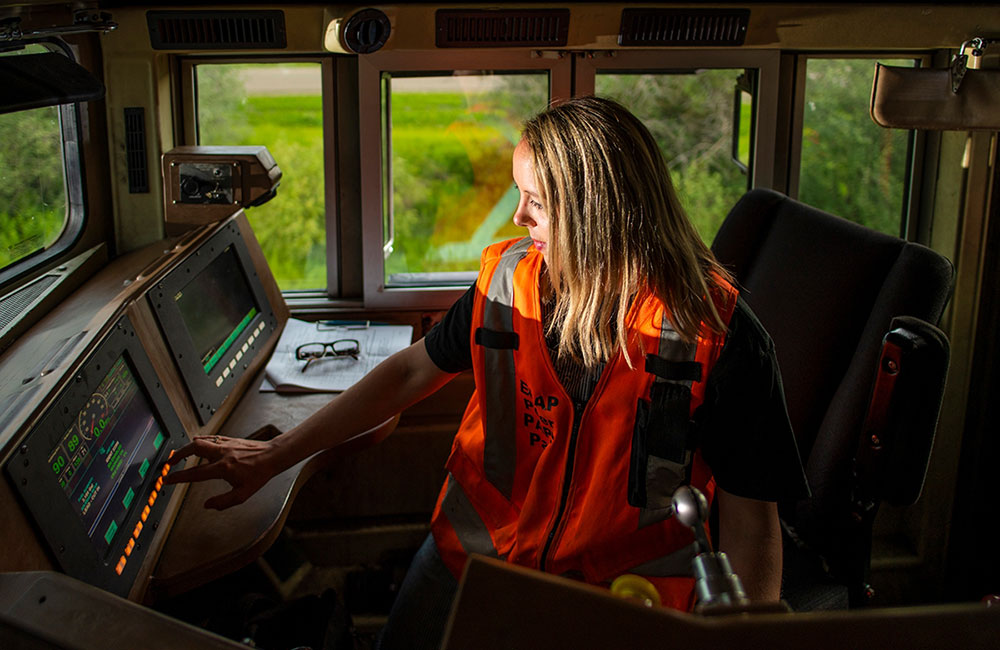