From burning bacon in her first semester of culinary school to taking home the gold medal for Cooking at WorldSkills 2022, Korae Nottveit’s SAIT education has taken her to the top of the podium.

From Oct. 23 to 26, a lineup of 30 chefs under 25 from around the globe took to the kitchen in Lucerne, Switzerland for the Olympics of skills competitions. Nottveit came out on top, bringing home Alberta’s first gold medal and Canada’s second gold medal in the category.

How did she prep to beat the heat of the kitchen at WorldSkills? Nottveit shares some highlights from her culinary journey so far and looks ahead to what’s next.

It takes a village

Nottveit credits the instructors she had during her time at SAIT and her family’s support, as key ingredients to her success at WorldSkills.

SAIT instructor and coach Michael Dekker and Sean Kettley, WorldSkills Team Canada expert from Halifax, flew to Switzerland with Nottveit to cheer her on from the sidelines. During her last day of competition, she created a dessert plate that looked more like art, thanks to skills she developed with the help of Chef Victoria German, SAIT Baking and Pastry Arts instructor.

The Culinary Arts program provides students with the discipline they need to succeed in industry kitchens. That means, no stopping for a peppermint latte if you’re running behind.

“If you’re 15 minutes early, that’s on time. If you’re anything past that, you’re late,” says Nottveit.

When she burnt the bacon in a breakfast class in her first year, Nottveit’s instructor told her she’d learn and get better. And she did.

“Taking failures and turning them into successes later on — every chef instructor did that for me,” says Nottveit.

Chef Dekker helped Nottveit land her current role as a sous-chef in California after she graduated in 2019.

She’s had plenty of practice working under high pressure conditions since, running the dinner service at Madera, a Michelin-starred restaurant at the Rosewood Hotel, a 30-minute drive from San Francisco.

And this is only the start of her culinary journey. It’s onward and upwards for Nottveit, as she refines her skills in the kitchen and continues to seek out opportunities to become the best she can, with a little help from her friends (including her SAIT instructors) and competitions like WorldSkills.

In a decade, Nottveit says she’d love to run a restaurant designed to provide fine dining upstairs and casual eats on the main floor.

“That way I can play in both worlds and also help out with the food cost all around,” she says.

One thing’s for sure: she knows not to leave the bacon in the oven too long. 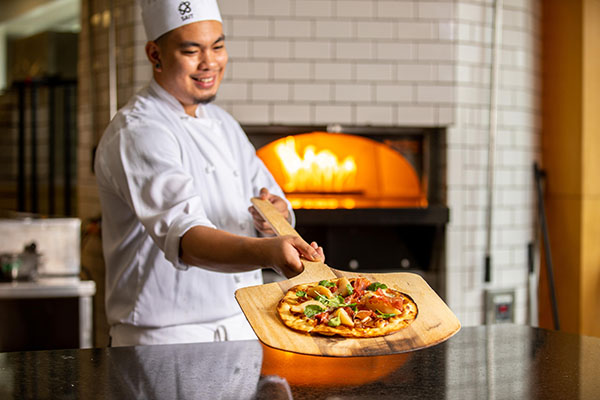