The School of Business and Chinook Lodge Aboriginal Resource Centre are bringing Indigenous media professionals together to share their own stories of working in the field and the knowledge of their experience covering Indigenous content in the media.

Through a past, present and future theme, the unique three-part series — featuring John Lagimodiere, founder of Eagle Feather News; Candice Ward, photojournalist and SAIT adjunct instructor; and Stephanie Joe, writer and journalist — is designed to help students and other audiences gain a better understanding of where we’ve been, where we are and where we need to go for true reconciliation in the media.

“In the past, there has been false reporting, bias and a skewed representation of Indigenous content in the media,” says Larry Gauthier, Manager, Chinook Lodge. “Truth and reconciliation isn’t about Aboriginal people reconciling. It’s about Canadians, settlers and immigrants, learning about our history, values, worldviews and belief systems — coming to understand us as people.”

Starting with a conversation

The idea for the series was sparked by a conversation about how Aboriginal people are represented in the media between Gauthier and Heather Setka, a communications instructor in SAIT’s Academic Services department.

The conversation led to an extended brainstorm with Jim Slobodian, Academic Chair of SAIT’s Journalism program, on how to take action on the Truth and Reconciliation Commission’s Call to Action Resolution 86:

We call upon Canadian journalism programs and media schools to require education for all students on the history of Aboriginal peoples, including the history and legacy of residential schools, the United Nations Declaration on the Rights of Indigenous Peoples, Treaties and Aboriginal rights, Indigenous law, and Aboriginal-Crown relations.

“The Calls to Action are essential for reconciliation,” says Setka. “We have the opportunity in this one Call to Action to do a small part, to take a first step in that direction.” 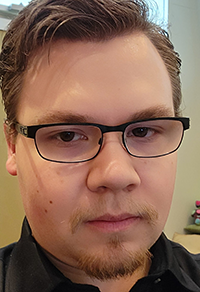 First-year Radio, Television and Broadcast News (RTBN) student Keith Driver has spent a fair amount of time in Chinook Lodge getting to know not only his Métis and broader Indigenous community here at SAIT, but also his first assigned beat.

When he heard about the speaker series he was originally looking forward to attending. But instead of listening in, he found himself behind the microphone cohosting the series with fellow RTBN student, Telly James.

“This was a great experience to get my feet wet, and also a chance to explore more about my own background — there’s so much I wasn’t aware of,” says Driver. “It makes me happy to see that people are willing to have these conversations. There’s no pointing fingers — we’re moving forward together.”

The series is open to anyone who wants to learn more about Indigenous representation in the media.

Organizers are hopeful the experiences of the featured speakers will help students, in particular, understand how Aboriginal multimedia has developed in Canada and what it’s like to be Indigenous in the field — including some of the barriers Indigenous media professionals have faced and overcome to be successful.

The presentations also include practical tips for working respectfully with Indigenous communities and provide an opportunity for some discussion around aspirations for the future.

“Overall, I hope the experience makes our students more thoughtful about covering stories that involve Indigenous people when they’re working in the field,” says Setka.

The final installment of the series focuses on the future and features Stephanie Joe, writer, journalist and SAIT grad. Register now and tune in Thursday, March 24 at 3 pm (Register Closed).

As far as what comes next, the organizers are focused on the final event but are also looking ahead.

“Reconciliation is a process, it doesn’t happen in one day, and it doesn’t end with this series,” says Setka.

“This is a good step in the right direction and I hope it continues, but it’s only step one,” echoes Driver. “Getting Indigenous people into the industry, building representation is not an overnight thing. My big thing is, this is not the end.”

Gauthier has seen how a class presentation or an assignment with an Indigenous focus can encourage students to do some research, learn some history and develop a personal commitment to reconciliation. From there, professional and institutional commitments have increasing potential for greater impact, he says.

“There is a lot of work to be done,” says Gauthier. “Aboriginal people have aspirations of being contributors in Canadian society, but there have been systemic barriers, discrimination and legislation that have prevented us from participating. When we talk about the future, and working together, having that understanding as a starting point is so important.”