“I'm very grateful for the NDT Foundations program at SAIT — it truly prepared me for a career in the NDT world.”

Gonzalo Villasmil had never heard of the non-destructive testing profession until his stepfather suggested it. Looking to make a switch from crunching numbers in an office as an accountant, Gonzalo took action and enrolled in SAIT’s Non-Destructive Testing (NDT) Foundations program. Now he's helping Elon Musk realize his vision of becoming a "spacefaring civilization" as a non-destructive testing inspector with SpaceX.

What were you doing before you decided to come to SAIT?

I was born in Venezuela and moved to the United States to live with my dad when I was about 13 years old. I spent my middle school and high school years in Beaverton, Oregon, and then moved to Los Angeles, California for college, where I majored in mathematics. After graduating, I worked in residential real estate as an accountant. I was learning a lot and enjoyed the fast-paced environment. But after a few years, I realized it just wasn’t something I was passionate about.

What made you want to get into the NDT profession?

I didn’t enjoy being stuck inside an office all day crunching numbers. I had a realization the role I was in wasn’t what I wanted to do for the rest of my life. So, I started talking to my stepdad who’s a mechanical engineer in Calgary, and he recommended NDT. It wasn’t something I’d ever heard of before but it sounded really cool because it was a good combination of working out in the field, working with my hands, being creative and also using my mathematics background to solve problems.

Why did you choose SAIT?

SAIT was recommended by my stepdad’s network and it was conveniently located 20 minutes from where he and my mom lived in Calgary. So, I applied and made the move to Canada.

Looking back, what was your experience like in the NDT Foundations program?

It was almost like working a full-time job — it was an intensive four months. But it really prepares you for a job in the field. After learning theory in the classroom, you go straight to the lab and do demonstrations. The instructors were great — not only do they help prepare you to pass the exams but they also provide perspective on what NDT life is like. I loved the fact that each method we learned came with a new instructor who had a ton of experience and insights. I’m very grateful for the NDT Foundations program at SAIT — it truly prepared me for a career in the NDT world.

What was your career progression like after you graduated from SAIT?

After I graduated in 2014, I received a few job offers to work in Canada, but it didn’t work out with my work permit. I realized I’d have to look at other options and checked a list of companies to see if any of them had branches in the United States. One of the companies I started to build a relationship with was IRISNDT. They were founded in Canada and expanded into the U.S., and were about to start a new branch in Los Angeles. Fortunately, the director of that branch was Canadian and very familiar with SAIT so he hired me on right away.

Since the branch in Los Angeles was brand new, I got to learn the technical side of things and became familiar with different sides of the business I wouldn’t necessarily have learned had I not come in on the ground floor. Most of my work was within the oil and gas sector, so I did a lot of testing in refineries, fabrication shops and labs.

A few years later, I was contacted by SpaceX. I knew a little bit about Elon Musk but ended up getting a book on him to learn more — I was impressed. Even though I was really enjoying my time in my current role, I thought I should still go and check out SpaceX. I went on a tour, and everything going on there was surreal. A rocket factory was something I’d never been exposed to.

In the end, it was a difficult decision. I had built a solid relationship with my boss at the time, but what sold me was how groundbreaking SpaceX was — I wanted to be part of that. I started with SpaceX in January 2017.

What’s your current role at SpaceX?

The company is very cutting edge, innovative and technology-driven. They’re all about acquiring the best tools of the trade so employees can perform at their best. This has also been the first time I’ve been exposed to robotics. I’m doing digital radiography, so I get to perform inspections while controlling a giant robotic arm that does the heavy lifting for me and minimizes my manual work exponentially.

I also meet with engineers to make sure the reliability of various parts of the rocket are up to standard, which has an impact on their design process. NDT is important to engineers as we provide them with crucial data needed to ensure the reliability of the rockets. I never expected to be part of those conversations. That’s the culture of SpaceX — it’s kind of like being a pioneer and it’s been very rewarding.

SpaceX reached incredible milestones in 2020. From sending astronauts to space, twice, and providing internet to rural areas through the Starlink missions, to making great progress on Starship and increasing our flight cadence — breaking our previous record of launching 21 per year to 26. SpaceX has made historic strides, and it’s a great time to be part of the company. I’m grateful to have been a part of these accomplishments and look forward to what the future holds.

What do you enjoy most about the NDT profession?

What I love about NDT is that there are countless methods you can specialize in. I love the variety of disciplines you can choose and grow within. There’s never a ceiling with this profession and there’s something for everybody.

How do you think your program at SAIT has prepared you to get where you are today?

It gave me confidence. SAIT does a really great job of truly preparing you to work — not just with theory, they prepare you to go out there and grow. Foundationally for me, SAIT is always there. If I’m trying to figure out a problem I haven’t encountered before, I always go back to the classroom training and the knowledge I gained there. I’m certainly proud to have gone to SAIT. I had a great time and the instructors were great. I still keep in touch with some of them.

What advice do you have for those considering a career in NDT?

Work with excellence — from showing up on time to the quality of your reports. Take pride in what you do and understand this is an integrity-based career. You’re signing off on something that can put people’s lives in danger. Be meticulous, have integrity, be honest and willing to grow. Be ready to solve problems and get creative. There’s always another step, discipline or method. Don’t feel like you’d ever get stuck doing something you don’t necessarily enjoy.

Learn from a SAIT and industry expert in non-destructive testing 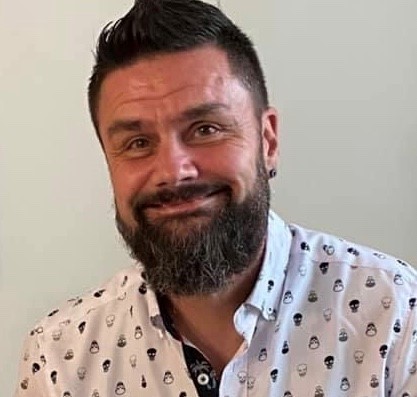 “The NDT industry is ever-changing. Even though the foundational principles remain the same, technology is constantly evolving. Equipment has moved from analog to digital, wired to wireless and capabilities have advanced greatly over the years. New methods of inspection, and the refinement of older methods, have given our industry many new avenues to take and many more career opportunities in the field.

Read more shifting gears stories — and write your own!

Thanks to a serendipitous email, Tyler decided to act on his goal of becoming a Master Electrician and upskill in his trade.

The galaxy’s the limit

From construction to aerospace — see where a career in non-destructive testing can take you.