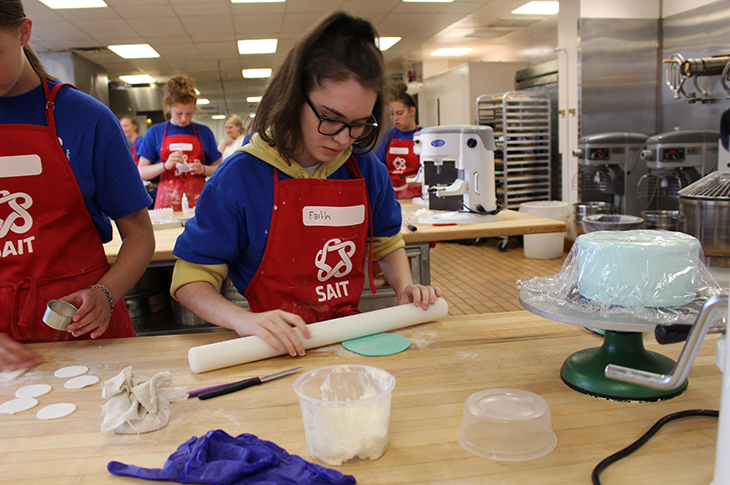 For Faith Mahoney, summer couldn’t come fast enough ― and that’s because summer means SAIT Summer Camps. The 16-year-old Fort McMurray native had barely finished her grade 11 finals before she was in the car heading south to Calgary.

“It’s amazing! Just being in this kitchen is so much fun,” Mahoney explains. “It feels so professional, learning what to do and the right kitchen etiquette. I’m tired at the end of the day, but it’s a very happy, sparkling tired.”

Mahoney has attended Summer Camps for the past three years. She first came to SAIT after being evacuated from her home due to the 2016 fires that devastated much of Fort McMurray. During the evacuation, Mahoney recalls feeling lost and frustrated. At the suggestion of her aunt, she enrolled in the Baking, Introduction camp that summer.

“I never even thought that I could be a pastry chef before I came to camp, but I just fell in love with it when I got here,” she says. “I've loved every minute of it!”

Finding the silver lining of her experience that summer, Mahoney discovered a motivating passion for baking. This passion inspired her to do her best at school so she could attend SAIT in the future. After returning to high school that fall, she was awarded Honours with Distinction for her academic achievements.

Mahoney later shared her story at the 2019 SAIT President’s Dinner in March 2019, where she spoke about her experience of attending Summer Camps and the impact it has had on her.

“It was really amazing to see how much people cared about me going through what I did,” she says of her experience that night.

Since March, Mahoney has continued her high achievement in school and was recognized by the Fort McMurray School Board for her efforts in raising funds for her fellow students. She and a group of actors from her high school won Best Small Ensemble for their performance at the Alberta High School Drama Provincial Festival in Red Deer in May.

She returned to SAIT this summer and completed the Baking, Advanced camp.

The high school student says she plans to finish her last year and enrol in SAIT’s Baking and Pastry Arts program. “I want to be here so badly,” she says. “I hope next year goes quickly!”

Because of her experience, Mahoney donates money from her allowance to the Summer Camps Endowment Fund, a $1.2 million fund that brings 85 to 100 campers to SAIT Summer Camps every year in perpetuity. SAIT also provides Summer Camp bursaries that allow underrepresented groups and families with financial need or other hurdles to send their children to camp.