The Digital Transformation of Downtown Calgary 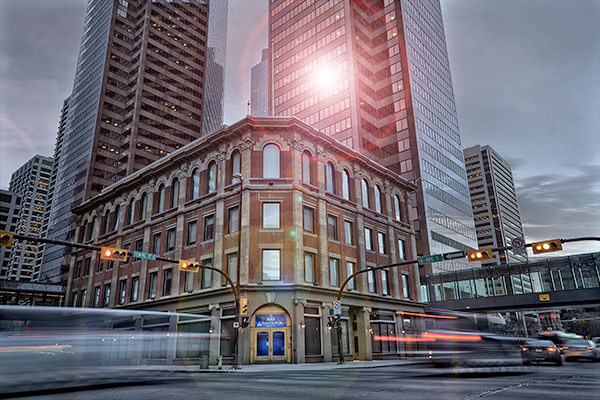 SADT is SAIT’s commitment to becoming a Downtown Innovation District

From 1970 - 1971, Boeing reduced its workforce in Seattle from 80,400 to 37,200. As the volume of activity in its local buildings and streets began to dwindle, a few provocateurs posted a sign downtown asking, “will the last person leaving Seattle turn off the lights?” After all, no one could envision how the city could survive following the loss of almost 50,000 jobs due to a swift downturn in the aerospace sector.

Although that was 50 years ago, Calgarians can empathize with Seattle’s past given our current urban reality. The 29.2% vacancy rate in our downtown is palpable — and like many local organizations, we at SAIT’s School for Advanced Digital Technology (SADT) understand that this phase of discomfort is a natural part of any city’s evolution. Discomfort is an opportunity. It leads to collaboration, risk-taking, culture-making and innovation.

The difference for Calgary in 2021 is that we’re acutely aware of being caught in the momentum of a great rewrite. It’s a time of digital transformation that’s touching every aspect of how we live, learn and work — and it's been accelerating for years. Take a moment to reflect on the growth of tech start-ups in Calgary — in just under three years, the numbers have swelled from 1,238 to an astonishing 3,083. Think about the constant news ticker sharing stories of corporations choosing to open offices in YYC. Not to mention the phenomenal digital transformation of Alberta’s energy sector. The flywheel has begun to turn. It’s our time.

SAIT and SADT recognize society is at the intersection of two massive, generational trends as a result of this transformation.

The combination of Calgary’s high vacancy and the need to diversify the local economy means our city is the perfect catalyst for technology and innovation. These factors are pushing Calgary to become a living, breathing urban laboratory for digital transformation — at a scale unseen in other cities around the world.

So, we are doubling down on downtown!

One way SADT is doing this is by working as part of the Downtown Innovation District Working Group, an early-stage discovery team bringing diverse perspectives and stakeholder voices together. This will help define what an innovation district could look like for Calgary, informing and advancing projects aligned to the City of Calgary’s Greater Downtown Plan. We’re actively working on this, and greater stakeholder engagement is coming soon.

In addition to convening voices towards a vision, SADT is lighting up the historic Odd Fellows building in the heart of downtown Calgary. Our urban home will become a community-centric hub for digital innovation as part of SAIT’s strategic presence in the core. This renovated space will host programs that explore the future of cities, foster experiments with digital layers of physical places, and leverage data and Artificial Intelligence (AI) to create intelligent spaces. We will consult experts across SAIT schools — including SADT’s local and global experts in AI and Machine Learning, extended realities (Augmented and Virtual Reality), Internet of Things, and human-centric design — to shape what’s next downtown and across the city.

As an example, SADT recently partnered with Helpful Places — a startup that spun out of Google’s Sidewalk Labs — to pilot a visual standard called DTPR. This new standard makes digital technology in public spaces transparent by providing a feedback loop where people can learn what data these technologies collect, how it’s used, and leave comments about how they feel. This pilot will roll out in SADT’s space later this year as part of a project in partnership with the SAIT School of Construction. As Edward Glaeser said in his book Triumph of the City, “Cities enable the collaboration that makes humanity shine most brightly. Because humans learn so much from other humans, we learn more when there are more people around us.”

SADT is linking arm-in-arm with partners to reimagine and redefine the status quo and equip Calgary’s downtown with digital literacy to become a fertile environment for the world’s best tech talent. This means creating a dense, community-centric, innovation district where people and ideas collide — out in the open — to share, experiment and build together as a community.

About the author: Jasmine Palardy

Jasmine Palardy is a community-builder and city-builder who brings creators of all stripes together to share and build — with a focus on more collaborative cities.

She has spent a career working with creative and technology communities to build programs and spaces that accelerate innovation.